Dear Internet Explorer user: Your browser is no longer supported

Please switch to a modern browser such as Microsoft Edge, Mozilla Firefox or Google Chrome to view this website's content.

Adam Dimech's website was launched in July 1998, initially as an experiment. From there it eventually grew to encompass a blog, photo gallery and numerous information sites. This page shows how the website has looked since its launch. 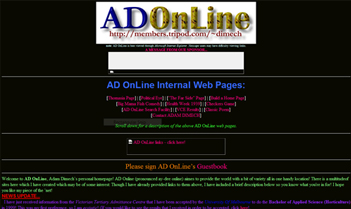 The oldest retained version of the website. The site was hosted with Tripod at http://members.tripod.com/~dimech. Pop-up ads were par-for-the-course with free hosting in those days and to make matters worse, this design also made use of <blink> tags! 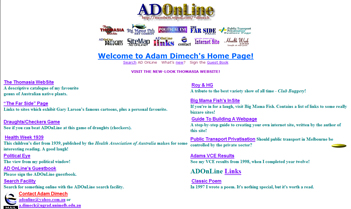 Tables were first utilised to arrange content and graphics used to promote key sites via image maps. This site took about 10 seconds to load on a 56kbps modem!

A cleaner look for the new millenium. I didn't have dedicated hosting available, so a cloaking subdomain URL was used: www.adonline.au.nu. Sites were variously hosted on Tripod, GeoCities and Telstra BigPond.

Unlike the simpler designs of the past, this made better use of colours and graphics. There was no blog software at this stage, so all stories were hand-coded with Microsoft Front Page and uploaded as static HTML pages. 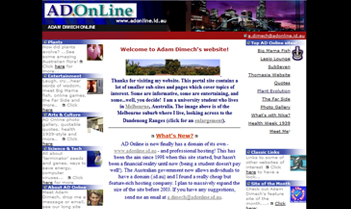 This text-rich design was a modification of the previous version, utilising more graphics. More importantly, it marked the launch of the website on its own domain - www.adonline.id.au 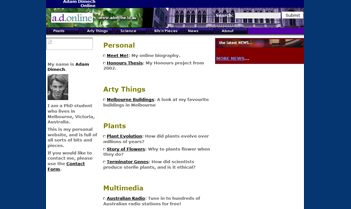 This was the first design to incorporate a blog and utilise PHP coding. The blog was powered by CuteNews and ititially known as The News Desk. Amazingly, this simple design (and logo) remained unchanged for 4 years! 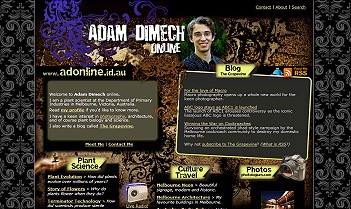 Following a switch in web hosts, this design represented a radical departure from the past, with a "grunge" style and more personalised look. 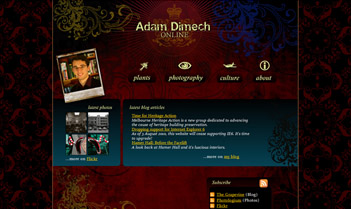 The August 2009 look was adopted with richness of colour and longevity in mind. This was the first version designed with Microsoft Expression Web.

After more than four years, the website was redesigned with new colours and a responsive design that enabled the website to be viewed on mobile devices and tablets as well as desktop computers. The code comprised of valid HTML5 and CSS3 and a sincere attempt was made to make the site as accessible as possible. 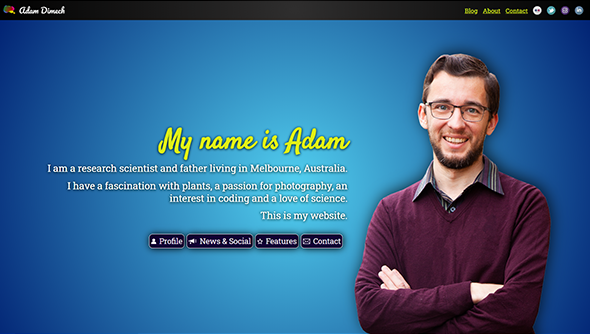 After an extraordinary seven years, the website was redesigned to utilise some of the newest HTML and CSS, including flexbox and grid for layout. A cleaner design is employed that supports “Dark Mode” whilst jQuery is given the boot.